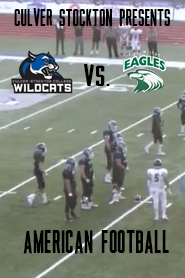 The victory snapped an 11-game on-field losing streak to the Eagles and improves the Wildcats to 2-0 for the first time since the 2014 season. The last on-field victory against CMU came in 2006, a 12-7 victory at home. C-SC was awarded a forfeit victory in 2013 after the Eagles used an ineligible player.

The Wildcats started the scoring on their opening drive, driving 63 yards on 11 plays before Ben Workman drilled a 29-yard field to make it 3-0.

C-SC caught a break late in the first quarter when a low snap on a punt attempt forced CMU punter Nathan Hampton to kneel on the ground. His knee touched the ground and the Wildcats took over on the eagle 33-yard line.

The Wildcats made the Eagles pay for the mistake as made it 10-0 on the first play of the second quarter when Grant took a pass from quarterback Korbin Marcum and scampered in from five yards out. Marcum was 4-for-4 on the drive covering 33 yards.
Workman added a 26-yard field goal to make it 13-0 in the second quarter before the Eagles tacked on two field goals of their own in the final three minutes of the first half to trail 13-6 entering the halftime break.

Neither team did much in the third quarter until CMU scored a touchdown with 2:37 to play period. The extra point was blocked and the Wildcats clinging to a 13-12 lead but with CMU holding the momentum.

That momentum shifted on the ensuing kickoff when Campbell fielded the kick at the 13-yard line and raced up the right side for 87 yards and a Wildcat touchdown. Workman's extra point made it 20-12 C-SC with 2:21 left in the quarter.

The Eagles added a third field goal to cut the margin to 20-15 and then the visitors forced a turnover on the ensuing possession and took over at the Wildcat 37-yard line. Five plays later CMU scored a touchdown and led 22-20 with 11:58 to play in the game.
Again the Wildcats didn't panic.

Starting at their own 25 after a touchback, the Wildcats answered with a 14-play, 75-yard drive that culminated in a three-yard touchdown pass from Marcum to Mateen Johnson. Marcum hooked up with Nathan Barnes on the two-point conversion and the Wildcats led 28-22.

The C-SC defense forced a three-and-out on the ensuing possession and this time CMU's Hampton ran a fake punt and was tackled by Kendall Kothe for a five-yard loss.
The Wildcats made the Eagles pay for that error and Grant blasted in from the 10-yard line on the fifth play of the drive to give the Wildcats a 35-22 cushion with three minutes to play.

Nick Lariviere intercepted CMU's Dantae Vandeven on the first play after the kickoff to seal the victory. The Wildcats ran out the clock to end the game.

Marcum was spectacular in victory, throwing for 305 yards on 39 of 47 accuracy and two touchdowns. Connor Perrine was his main target, catching 11 passes for just 64 yards. Perrine caught nine of those passes in the second half.

Campbell had eight receptions for 86 yards while Stephen Murphy collected nine passes for 72 yards. Marcum connected with seven different receivers in the game.
Barnes finished as the leading rusher for the Wildcats with 80 yards on 15 carries. He recorded 62 yards on 11 carries in the fourth quarter alone. The Wildcats finished the game with 101 yards rushing and 406 yards overall.

Defensively, Pat Robinson totaled a team-high eight tackles, including four solo stops. Robinson also had the Wildcats' only sack of the game and recorded two tackles for loss. Dalton Huffmangarnered seven tackles in the game, while Stephen Benson had three passes defended.

C-SC will try to make it three straight to start the season next Saturday at home against MidAmerica Nazarene University. The Pioneers defeated to Graceland 38-3 Saturday to even its record at 1-1. Kickoff is slated for 2:30 p.m. at Poulton Stadium.